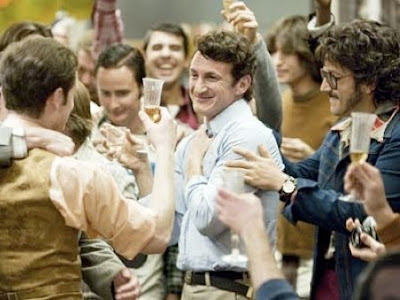 I've been meaning to get around to blogging for more than a month, but time has continued to slip away from me for a variety of reasons. It's only now, on the last day of 2009, that I've finally found the time - and the motivation - to post a few catch-up comments.

I figure I'll approach my review of the year in three parts: film, performance and personal stuff. Let's start with cinema, shall we?

Compared to 2008, in which I only saw 33 feature films at the cinema, this year I had a much better year, seeing a grand total of 77 new release features, as well as a few good shorts. Given my diverse tastes, it's no surprise that I took in everything from homegrown arthouse treats to big budget blockbusters, and everything in between.

Overall it's been a pretty good year, especially Australian films, as various pundits have been discussing at length over the last few weeks. But who cares what they think? This is all about what I think, isn't it?

So, in no particular order, here's a (very subjective) list of some of my favourite and most memorable films of 2009:

MILK (dir. Gus Van Sant). One of the most satisfying biopics I've ever seen, with brilliant performances from Sean Penn as gay rights activist Harvey Milk, James Franco as his lover Scott Smith, and a mesmerising turn by Josh Brolin as Dan White, Milk's killer. Archival and contemporary footage are perfectly blended in this outstanding, moving and deeply relevant movie.

MARY AND MAX (dir. Adam Elliot). In a year of great Australian films, this was one of the best: a claymation story of trans-continental friendship, a wonky paean to being an outsider, and a gloriously realised homage to suburbia.

STAR TREK (dir. J.J. Abrams). Vividly re-imagined, this re-boot of the Star Trek series was deeply satisfying for fans and non-fans (such as me) alike. An exuberant, energetic and breath-taking re-working of a sci-fi classic.

KISSES (dir. Lance Daly). At the opposite end of the spectrum from Star Trek was this lo-fi, low budget, and small scale Irish charmer about two pre-teens running away from their grim estate homes to the bright lights of Dublin. Simple, sublime and deeply engaging (and one of 29 films I saw at this year's Melbourne International Film Festival).

QUEMAR LAS NAVES aka 'BURN THE BRIDGES' (dir. Francisco Franco Alba). One of the highlights of this year's Melbourne Queer Film Festival, this stunning example of Mexican Gothic featured an abundance of baroque elements - a decaying family home, a dying mother, a poisonously close relationship between a brother and sister, Catholicism, tortured homoeroticism and adolescent longing. It could have been a mess, especially as it was the director's debut feature; instead, it was remarkable.

LOOKING FOR ERIC (dir. Ken Loach). A comedy from the master of kitchen sink miserablism? Yes, and a fantastic one at that, which was nonetheless also a quintessentially Ken Loach film. A memorable and moving story of hope, love, family life and redemption, with a dash of magic realism, and a hefty dose of football superstar Eric Cantona.

THE MAN WHO LOVED YNGVE (dir. Stian Kristiansen). One of the freshest, most memorable 'coming out' films I've ever seen, set in Norway in the 1980s and peppered with tracks from such bands as The Cure, REM and The Jesus and Mary Chain.

And the worst films of 2009? Just briefly, they included:

Posted by richardwatts at 2:47 pm

Email ThisBlogThis!Share to TwitterShare to FacebookShare to Pinterest
Labels: 2009, cinema, the year in review

I had no idea about The Man Who Loved Yngve because it didn't play at SF's gay film fest (though it showed in Los Angeles & Seattle.) Hope it comes out on subtitled DVD - my Norwegian's pretty rusty.

I hope you get the chance to see it, Larry-bob - it's such a great film.

And damn, I forgot to add the Mexican film Sin Nombre to the list - a visual and emotional powerhouse.